75 kilometres southeast of the city of Durango, Mexico.

On December 23, 2013, a technical report was released and titled, Preliminary Economic Assessment for the La Joya Property, Durango, Mexico, with an effective date October 21, 2013, as amended March 4, 2014 (“PEA”). The PEA was prepared following the standards established in NI 43-101 by EBA Engineering Consultants, a Tetra Tech Company (EBA).

The PEA focuses on the first stage of La Joya development ("Starter Pit") as a low strip, open pit with an initial 9-year life of mine plan ("LOMP"). The conceptual open pit operation would be in conjunction with a 5,000 tonnes per day (tpd) conventional mill and flotation/leaching plant to produce a high-grade silver-copper concentrate with gold credits.

The La Joya Property is underlain by Cretaceous sediments along the western margin of the Mexican Mesa Central, at the transition from the Sierra Madre Occidental, along the broadly defined San Luis-Tepehuanes fault system. The fault system is commonly referred to as the Mexican Silver Belt based on the country scale distribution of silver producing mines juxtaposed along the trend. The sedimentary package at La Joya consists of the Cuesta del Cura Limestone comprised of limestone with minor chert and siltstone overlain by the younger Indidura Formation comprised of calcareous siltstone, mudstone and siliciclastics.

Sulphide mineralization generally transitions from chalcopyrite-dominant in proximal skarn to bornitedominant in distal skarn. Late sub-vertical laminated quartz-calcite veins bearing freibergite and arsenopyrite cross-cut pre-existing skarn mineralization and, although related to magmatic fluids, is not considered to be related to the skarn mineralizing events. Trace amounts of oxide from meteoric weathering processes are present within the structural corridors at depth. 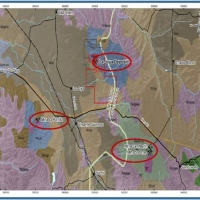 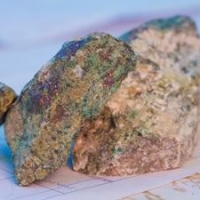